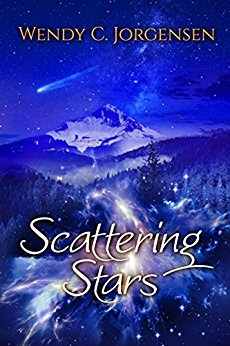 "One wrong move could jeopardize the future of the planet."

Book One in author Wendy Jorgensen's Scattering Stars Trilogy is full of suspense, intrigue, and romance. This gorgeous cover depicts the Colorado Rockies, the setting for this great story. Sixteen year-old Eve Hunter and her father return to Ridgeway, the town of her birth and where ten years earlier her mother drowned in a strange accident in a nearby canyon. Eve's grandfather, Jarak, is a powerful man who is considered a prophet among  the Colonists at Terra Dyne. Eve attends school at Ridgeway High and notices the close-knit teens from the colony are different in several ways from the other students, and she is certain they all share a common secret. Eve makes close allies, and a few enemies, on her journey as she discovers who she and the colonists really are.

Scattering Stars is a story about faith, choices, and courage. It’s a reminder that we are not on this planet by accident. Instead, we each have a purpose and a mission to perform.

From page 159 of Scattering Stars.

"What are we doing here?" I asked.

"Can't you feel it?" Brad asked, with a hint of anticipation.

"The power. The potential. Whenever I lose track of who I am, I drive through these gates and up to the top of the hill so I can see Terra Dyne. I look over the valley . . . And somehow I know that it all matters, that I matter."

I asked Wendy Jorgensen what inspired her to write Scattering Stars. Here is her reply:

"From the time I saw the movie, Escape to Witch Mountain, I’ve been fascinated by aliens. Not the creepy, lizard-looking aliens, but extraterrestrials who resembled humans and could live amongst Earth’s inhabitants, hiding in plain sight. Within a few years more science fiction movies followed: Close Encounters of the Third Kind, E.T. the Extra-Terrestrial, and Cocoon. I loved them all. When I decided to write my first novel, there was no question as to what I would write about.


On Colorado’s western slope, not far from the towns of Ridgway and Telluride, stands an extinct volcano called Lone Cone that rises to over 12,000 feet. A distinctive and solitary peak, Lone Cone is separated from nearby mountain ranges and surrounded by farms and wilderness. We’ve owned land in this area for many years, and the secluded location seemed a perfect landing site for my aliens."

The title for Jorgensen's novel is a quote from Jalaluddin Rumi--

Scattering Stars is expertly written and thought provoking. The characters are well developed. The story addresses issues of where our own society may be headed.

Though the ending of Scattering Stars answered all my questions, I found it ended too quick and could have been fleshed out more. But, of course, this left the story open for the sequels--which I am looking forward to reading!

I recommend Scattering Stars to all readers who enjoy a great YA story--with a touch of the world beyond.

Your comment will also make you eligible to win a copy of Clairvoyance by Joan Sowards.