This culinary mystery keeps you reading from the first sentence, "The first police car went by at 9:23 according to the clock on the microwave." Author Josi Kilpack keeps you guessing, leaving no stone unturned until the murder is solved. The main character is 56 years old--no college-age beauty--and I found it refreshing. She had much energy and wits about her--and of course there was a subtle romance that will probably carry on into Josi's next mystery English Trifle.
Can't wait to try the recipes!
Posted by Joan Sowards at 11:25 AM 1 comment:

Chocolate Roses--Share a funny story about a kiss.

Chocolate Roses is at the printers!
Janie Rose Whitaker’s whole world revolved around her chocolate shop until Roger Wentworth and his daughter Emily moved in next door. Anyone would think he fit the mold of the “perfect guy,” but soon Rose discovers the secrets of Roger’s life. The more Rose resists getting involved in his complex life, the further they are drawn into a bittersweet relationship. You will laugh, cry, and crave chocolate as you read this humorous LDS, Jane Eyre parody.
Since Chocolate Roses is a love story, I invite everyone to tell a funny story about a kiss--in good taste, of course. My story is the classic one. My date, hoping to get a kiss at the doorstep, leaned against the doorbell. My father greeted us seconds later. Needless to say, there was no kiss.
Posted by Joan Sowards at 2:51 PM 5 comments:

Illuminations of the Heart by Joyce DiPastena

I truly loved reading ILLUMINATIONS OF THE HEART.
The author, Joyce DiPastena fell in love with the Middle Ages when she first read Thomas B. Costain’s THE CONQUERING FAMILY in high school. A graduate of the University of Arizona with a degree specializing in medieval history, Joyce lives in Arizona with her two cats, Clio and Glinka Rimsky-Korsokov.
Click here to read author interview with Joyce.

Synopsis:
"Clothilde." He spoke the name on a breath like a prayer. Then he lowered his head and kissed her.

Her heart is lost in that first embrace, her world is shaken to its foundations. There is just one problem; her name is not Clothilde. It is Siriol de Calendri. Trained in the art of illumination in the far-off city of Venice, Siri is directed by her late brother's will to the county of Poitou in France, where she enters the guardianship of her brother's friend Sir Triston de Brielle. Once in Poitou, Siri hopes to find employment in an illuminator's shop - until Triston unexpectedly snatches her heart away with a kiss.

Triston is a man of quiet honor and courage, but the guild he carries for the death of his late wife, Clothilde, has left him numb and hesitant to love again. Worse yet, Siri bears an uncanny resemblance to his lost love. Or does she? Her merry laughter and twinkling eyes are very different from his late wife's shy smiles and quiet ways. Yet when he gazes into Siri's face, all he sees is Clothilde.

Then Triston's past returns to threaten them both. Will his tragic life with Clothilde be repeated with Siri? Trapped between the rivalry of the king's sons on the one hand and a neighbor out for vengeance on the other, Triston realizes it would be safer to send Siri away. But how can he bear to lose her again?

Siri is determined not to be cast off and not to live in another woman's shadow. She has illuminated many a priceless book with pen and paint. But can her own vibrant spirit illuminate the darkness in Triston's soul and make his heart beat for her alone?
This is Joyce's second novel, the first is Loyalty's Web, another delightful tale about the Middle Ages. Visit Joyce DiPastena at her fun blog.
Posted by Joan Sowards at 8:58 AM 1 comment: 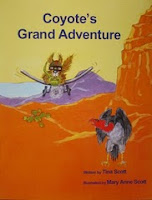 Coyote dreams of flying everyday in his afternoon nap. Buzzard threatens to
eat Coyote and his friend Lizard, but Coyote makes a deal with the old Buzzard that changes the desert canine's flying career forever.
Join Coyote on his adventure of a lifetime as he learns how to make his dream come true.
"Get away from me, you crazy Buzzard." Coyote got up and shook off the dust. "I'll fly. I just need to practice first. If only there was a strong wind."
My three-year-old grandson loves us to read Coyote's Grand Adventure. I asked him what he liked about the story. He became very animated. "Because Coyote flies down and saves Lizard!"
Written by Tina Scott, Illustrated by Mary 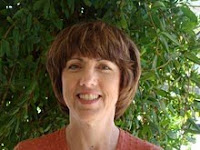 The Sharp Edge of a Knife

The Sharp Edge of a Knife by D. N. Giles is a true account of a religion teacher kidnapped by two cons and driven across Arizona into New Mexico. The men only want the teacher's car to take them eastward to where one of them knows he can get his hands on post office money. They think the only successful way to get the money is to kill the "preacher."
Through constant prayer, the teacher is inspired in what to say to these men that softens their hearts into not killing
him, ultimately saving his own life.
DN Giles does a great job in capturing this fascinating

story--one we all should read.
With God, all things are possible.
To read interview with DN Giles, click here.
Posted by Joan Sowards at 8:12 PM No comments:

My children live to make movies. They have several shorts on YouTube and have entered a few film festivals and even won awards. Listen to Mom—bragging again.

But an interesting thing happened within the last week. My sons and their friends made a live video version of the opening song “After Today” of The Goofy Movie released back in '95. After winning first place in the Phoenix Valley Institute Film Festival in November 2009, they put it on YouTube. In a little over three months, it had earned 5,000 views.

On Thursday of last week, the view count skyrocketed by thousands! After doing an Internet search, they found that two popular video sights had posted and recommended it.

Within a week, the video has had over 112,000 views. It just goes to show what can happen with the right promotional support.

Click here to watch “After Today.” (You can also watch it in Japanese, Spanish, and French.)

Posted by Joan Sowards at 12:09 AM No comments:

Sarah Eden's novel is released this week! Find Courting Miss Lancaster in LDS bookstores. Congratulations Sarah!
Harry Windover adores blonde, green-eyed Athena Lancaster, but alas, a penniless man like himself has no hope of winning a young noblewoman's hand. To add insult to injury, Athena's brother-in-law and guardian, the Duke of Kielder, has asked Harry to assist Athena in finding the gentleman of her dreams. But the lovesick Harry is cunning as well: as the weeks pass, he introduces Athena to suitors who are horrifically boring, alarmingly attached to their mothers, downright rude, astoundingly self-absorbed, and utterly ridiculous.
Athena can't comprehend why she is having so little success meeting eligible and acceptable gentlemen. Indeed, her circle of admirers couldn't be less admirable--nothing like the loyal, gentle friend she's found in Harry. But how long can Harry's scheme be hidden before it is discovered? And what will Athena do when she uncovers Harry's deception?
Escape into a charming regency world in this delightfully romantic comedy of manners that will entertain you to the very last word.

This delicious cover is for my soon-to-be released novel Chocolate Roses.
Please rejoice with me by eating your favorite chocolate!
(Too bad it clashes with my heading. I'll have to figure what to do about that.)
Posted by Joan Sowards at 1:12 PM 4 comments: