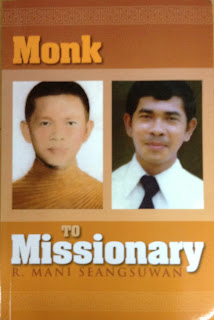 Monk to Missionary is the biography of R. Mani Seangsuwan, a councilor in the Thailand Bangkok Mission where my husband and I are serving, and illustrates the courage Thai Buddists must have to convert to Christianity.

Born in Chumphon province in the South of Thailand, Mani knew little of the world outside his small village. At age seventeen he left home in search of fun and adventure. He joined a group of "party animals" in Lopburi, Thailand, and thought for a time this was the life for him.
His mother convinced him that he needed to correct his behavior and suggested he become a Buddhist monk. He followed her advice he became a monk at the local monastery. At the end of three months, the typical period of service as a disciple of Buddha, he decided to continue on. After a year he moved to a Buddhist temple in Thonburi across the river from Bangkok. It was here he started to meet Christians. Taking a pamphlet from the Baptists he received a bible study kit in the mail. He studied the Bible in secret while still a Buddhist monk.
His next step was to earn money to become a school teacher. This was the vision that his mother had for him. He met more Christian missionaries and felt good about their message. He was still concerned how other Thais would view him if they knew he was studying about Jesus Christ. The Thai people believe, "To be a good Thai, one must be a good Buddhist". How could he go against his family and the well established culture of his homeland? His decision changed the rest of his life.

"While the book about the author's transformation from Buddhist monk to Mormon missionary is written on less than 100 pages, the story is one of magnitude."
-Deseret News.

I am pleased to add Monk to Missionary to the Church History Library collection, where it will be preserved and made accessible to future generations

I just finished Monk to Missionary. It was very interesting and inspiring reading. I enjoyed the life story of Mani Saengsuwan very much. He is one of the great pioneers of the Church in Thailand. What a remarkable journey of a true seeker of truth, one that has taken great courage. I admire Mani and Nadda so very much.

- Alan H. Hess - One of the first six missionaries to Thailand 1968

Purchase Monk to Missionary
Posted by Joan Sowards at 8:46 PM No comments: