Here is a synopsis of Spinster's Folly:

Marie Owen yearns for a loving husband, but Colorado Territory is long on rough characters and short on fitting suitors, so a future of spinsterhood seems more likely than wedded bliss. Her best friend says cowboy Bill Henry is a likely candidate, but Marie knows her class-conscious father would not allow such a pairing. When she challenges her father to find her a suitable husband before she becomes a spinster, he arranges a match with a neighbor's son. Then Marie discovers Tom Morgan would be an unloving, abusive mate and his mother holds a grudge against the Owen family. Marie's mounting despair at the prospect of being trapped in such a dismal marriage drives her into the arms of a sweet-talking predator, landing her in unimaginable dangers. This fourth book in the Owen Family Saga is infused with potent heart and intense grit.

Marsha has agreed to answer two off the wall questions here. The first is: 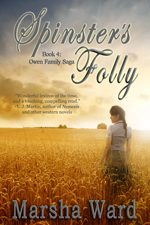 Which of all the love interests in your novels could you, in real life, fall in love with or want your daughter to marry?

Marsha: This is an interesting question, especially in regards to my daughter. Before I finished Spinster's Folly, I would have said "James Owen." Now, however, I have a new favorite male character with whom I could fall in love. I know for sure I would want my daughter to marry someone like Bill Henry. He's an interesting guy, but he's steadfast and loyal, and I would want that for her, or for me!

What is different about Spinster’s Folly than the other books in the Owens series/saga?

Marsha: This question is harder to answer. The difference is in that I used a real-life experience as a basis for a character and a part of the plot. I deal with a hard issue, abuse in several variations, but I've conquered hard issues before, so writing about that subject doesn't set the book apart. I've never written light, fluffy novels, but perhaps this one goes a bit deeper into intensity. Maybe giving more dimension to the interactions of the mother and father, Rod and Julia Owen, helps distinguish this novel. Overall, it's probably written with more facets and depth because of my growth as a writer.

Thank you, Marsha, and best wishes with your newest novel. I am looking forward to reading Spinster's Folly, as I have read the first three in the series and recommend them to anyone looking for a fantastic read and a great series.

Visit Marsha Ward at her Facebook Event where she is giving away super prizes in honor of her new novel. One of the prizes is Chocolate Roses by Joan Sowards!

The first three books in the Owens Family Saga:

November 11
Stardust in My Pocket

Readers: Which of all the love interests in the novels you have read, could you in real life, fall in love with, or want your daughter to marry?