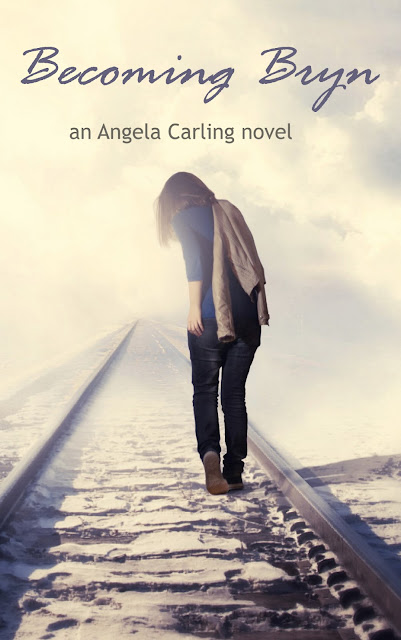 For months, Jesse has been envious of her twin sister Bryn and even has a crush on Bryn’s gorgeous, popular boyfriend, Quinton. When Jesse awakens from a coma to learn that everyone thinks she IS Bryn, the option of actually taking over her sister’s life is beyond tempting, but there’s a downside. She’d have to give up her relationship with Ethan, her best friend and the only person she trusts. Could she actually live as Bryn for the rest of her life? And if her family and friends found out, would they ever forgive her?

Here are two reviews of Bryn:

Becoming Bryn went to places I didn't expect. You want to laugh and cry and swoon (yes, very much swooning indeed... there was an excellent kiss... not telling you with WHO though!) and not be able to put the book down because of it. Angela Carling knows how to hold together an intricate story and tell it in the best way possible.

The book is beautifully written very well done from start to finish. I ended up staying up super late till three in the morning reading, even had tears in my eyes because the end is just so amazing.
-Mandy Sickle

Here is an excerpt from Becoming Bryn that will leave you wanting to read more:

The night air was balmy, and after awhile we turned off the air conditioning and opened the sunroof. Last summer Bryn and I had spent hours shopping with our dad, looking for a car we could live with and Dad could afford. Neither of us had seen a Honda four-door from the nineties as our dream car, but the sunroof had made it all better. The sunroof was the only reason we begged Dad to get it for us. He bought it on one condition, that Bryn and I would be willing to share the vehicle. Tonight as we drove down the weathered two-lane road toward the corn maze, warm air slipped in through the sunroof, brushing against our cheeks and dancing through our hair. Between the smell of freshly cut corn and alfalfa and the open sunroof, I felt so alive, almost untouchable. “Turn on the radio,” Bryn said loudly over the moving air above us. I reached over and pushed the plastic knob. Inside the car, the air was instantly charged with the pounding beat of a dance song. We both belted out the lyrics, singing badly but joyously over the radio. I looked over at Bryn as she sang. Pieces of her carefully done hair had escaped from their bobby pin prison and now flew wildly around her face. She looked happy and surprisingly, for a moment, I felt a sense of contentment. It wasn’t genuine happiness, but it was enough for tonight.

Up ahead on the right side of the road, I could see the tall stalks of the corn maze. Next to the maze sat a small organic supermarket. I’d been to the store with my mom to buy local honey a couple of years ago. That day, I’d ended up waiting an extra thirty minutes while she chatted with the owner as if they were old friends. I’d tuned out a lot of the conversation but I did learn that the same family who grew the corn maze owned the store and a citrus orchard just behind that. Tonight the market was decorated with long strands of small orange and purple lights. Out front, leaning up against a weathered picket fence that ran the perimeter of the property, was a large hand painted sign that read: Haunted Corn Maze, $8.00. As we got closer, I could see that just beyond the fence, waiting for the maze to open up was a large crowd of people dressed up as everything from doctors to vampires. We knew somewhere in the mass of people were our friends.
There was no turn lane on the narrow road, so I flipped on my turn signal and began to slow down just before the dirt entrance that led to the market came into view. Bryn, who had been straining to look past me for her friends, finally gave up and undid her seatbelt. By the time we stopped, she was hanging out of the sunroof, waving wildly and yelling across the street to a couple of the girls I recognized as cheerleaders on Bryn’s squad. I looked up at her, smiling, so excited and confident… Then as I glanced in the rear view mirror I saw another car coming up behind us. The car was weaving all over the road and driving way too fast. Worst of all, I could see from the headlights behind him that the driver wasn’t paying attention, that he was looking down at something in his lap.
Like a voice in my head, I remembered my mom complaining about the fact that there was no turn lane to get into the farmer’s market, talking about how dangerous it was. “Someone’s going to die out here,” she’d said. I thought she was being melodramatic.
I watched helplessly as the car barreled towards us. There was nowhere to go. There were only two lanes and a constant stream of cars came from the other direction. Even if I’d wanted to pull off the road, a huge canal filled with irrigation water made it impossible. Panic began to surge through my veins in the form of adrenaline; yet suddenly, simultaneously, time seemed to crawl, putting everything around me into slow motion. The approaching car, the screaming teenagers across the street, my sister calling out to them – it felt choppy, like an old silent movie. I could imagine in my head a black and white version of the scene with comments added like, “Oh no, we’re going to die!” written in old typewriter text against a flimsy screen.
Just before the car behind us made impact, I could feel myself laughing darkly at my own imagery. Then, in my ears and in my bones I heard and felt the crushing of metal as the car struck us with full force from behind, launching us like a pinball in a classic pinball machine, shooting us forward with deadly aim right into oncoming traffic. For a second, or maybe half a second, I was aware of my sister’s legs being lifted from the seat she was standing on, and I knew somewhere above me she was being thrown around like a ragdoll. Then I saw nothing but the enormous cement truck right in front of us. Somehow I knew the truck driver had no time to change his course, and my heart, which suddenly felt as if it was made of lead, plummeted into my stomach. With only feet between us, I noticed that the word “Rock Solid” had been plastered across the black exterior paint of the truck. Clever, I thought morbidly, remembering that I had seen similar trucks in our neighborhood. Then before total panic could even really set in, before I could scream or cry, or move out of his path, our tiny economy car and his massive cement truck collided and all of my thoughts and fears and impulses slipped away into total blackness.

Angela Carling was raised in Palm Springs California, but lives Arizona with her husband, three kids and five felines.  After years of denial she finally admitted that she is a hopeless romantic which led her to write her first Young Adult book Unbreakable Love. Since then she’s published three more books, Shackled, Becoming Bryn and The Secret Keeper. Shackled won the silver IPGA award in 2012 and has been optioned as a screenplay. She always eats the frosting off her cake and leaves the rest, and can be caught singing in public bathrooms just for the acoustics.  When she’s not writing YA novels, she’s mentoring teen writers, making pizza with her family or dreaming of taking a nap, not necessarily in that order.

Heidi Murphy's Review of Bridges of the Heart

With each new review of Bridges of the Heart, I think it's the best one yet. I really like this one Heidi Murphy posted today on Goodreads.


At the death of her mother, 21-year-old Rachel breaks down, fleeing from Maxson Everell (the man who wants to marry her), a grieving father, and a sister who has secrets. It isn't until a friend pulls her back to the desert that she meets a strange man who tells her she has a special place in time--at Maxson's side. Rachel's not about to give the freak any credence, since he tells her she should call Maxson on the night he's getting engaged to another girl. But what's a girl to do? She still loves Max. She curls up under the threadbare quilt on the end of her bed--the one that smells like jasmine.Rachel wakes up two hundred years in the past, near her ancestress' log cabin in pre-Civil War North Carolina. She has a murder to solve, a treasure to find, and a whole passel of angry-hornet family members to cobble back together, all while trying to pose as a boy, learn to milk a cow, and avoid a major family war. As Rachel works to help her forebears solve their supposedly insurmountable problems, her own come into sharper focus.Things are humming along right fine until Rachel helps meet Jane's housepayment--with three modern pennies. All heck breaks loose when the rent collector accuses Rachel of counterfeiting. To add insult to injury, the Sheriff looks just like Maxson, reminding her at every turn that she has to somehow get back to her own time to make things right with the man who should be HER fiance, before he asks another girl. I loved the premise of this story. Who wouldn't want to go back in time and fix things in their distant past? Who wouldn't want to go back and find out why this guy turned to piracy and that one joined a strange new church? Sowards' fabulous settings took me right into 1800's South Carolina with its jasmine-scented quilts, calico bonnets, bucket-stomping cows, and ramshackle jails.I wanted to help Sam, the runaway slave, on his way to freedom. I wanted to show Coker (Rachel's third great grandpa) that he amounted to something. I wanted to hug Rachel and Jane and tell them everything would turn out okay, because they felt like My People.Get this book for a fabulous journey through time in this fictional story about true people.